It snowed again yesterday.  Just a few inches at the house, but it was enough to encourage me to make lemonade out of lemons.  So last night I packed up my backcountry gear and headed out this morning at dark o’thirty to make some turns before work.  In my haste I forgot my camera, so no photographic evidence is available.

With no other cars at the trailhead (I guess the die-hard powder skiers are over it now?) I was on my own breaking trail, marveling at the cold boot-top snow I was seeing on May 11!  The winds had hammered anything not sheltered, so I chose to descend in the shelter of the trees.   Surprisingly winter-like snow on a firm base meant that it might not have ranked as one of the most epic powder days I’ve had this season, but it was epic for May.

Much to the chagrin of about half the local population, winter is just not ready to say goodbye.  This week brought more snow – and cold temps – to the area, leaving roads icy, open-toed sandal wearing women cold, mountain bikers frustrated, and powder loving skiers and snowboarders very happy.  As one of the latter, I only really had one opportunity to get out, so yesterday after work I convinced a friend to join the dog and I for a quick lap.

Admittedly we were both slightly skeptical about what snow we’d find on April 28th, even though Squaw Valley had been crowing about the 15″+ it had received on the upper mountain.  We quickly realized that there was a not-insignificant amount of snow.  Enough that we had to work a bit to break trail.

We opted for a lower angle pitch, and the snow was fluff on top of a nicely consolidated base.  Face shots were had by the dog, and while the humans didn’t get quite that, it was an elegant sufficiency, especially considering that some of us figured we’d seen our last powder day of the season last week.

As it snowed on and off again today, I’m very tempted to set the alarm for a dawn patrol tomorrow.  After all, the endless winter has got to end sometime, right?

During the ski season, I deliberately schedule my life to avoid sacrificing my weekends for non-skiing events.  It’s all about snow (preferably powder), and my family has learned to deal with it.

Cue the current spring weather we’re seeing at Lake Tahoe. High pressure, mild days and cold nights are not great for finding powder (or winter) snow conditions.  That said, in the spirit of making lemonade, it *is* ideal corn snow harvesting time, and I hear it’s been good.  I say ‘hear’, because I’ve missed out, thanks to a work event I put on last week, and this past weekend’s sacrifice to attend roller derby school.

Let’s be clear – I am still a derby noob, trying to stay upright while attempting to block and hit.  It requires more synapses than I think I have at this point, but I’m having fun.  With the news that a renowned derby coach was coming to Reno, I figured that I ought to make the effort and see what I could learn.

This is how I found myself in an abandoned grocery store off Moana Lane in Reno early last Saturday, with girls from a number of other local teams, and a guy who has played a big role in the resurgence of roller derby.  Coach Pauly knows his stuff, that’s for sure, having coached some of the best leagues out there.

Our group was an assortment of skaters, ranging from really kick-ass to very new.  Even with such a wide range of skills, Pauly’s drills were ones we could all do, admittedly at different speeds and with varying levels of success.  His frank style was refreshing, and he took the time after every drill to explain the importance and role of the drill, making sure we understood the larger strategy.  That was particularly useful for me, because typically when I’m thrown into a jam I feel like a deer in the headlights, and anything beyond that very moment is beyond my capability.

Since I had to leave the workshop early, I can’t confirm or deny that diplomas were awarded.  Even as a dropout, I can say that I did come away with a better understanding of how to best ‘knock bitches down’ (Kidding, Mom! Sort of….).

And how to best stay upright while doing it.

It’s been a hectic week, coming back from traveling and trying to regain some semblance of control at work and at life.  A couple of surprises, with such key things like employment and health insurance, added uninvited excitement.  Because of this I wasn’t all that focused on the snow, but I was surprised at the oddly warm temps we encountered when we got back home.  While N kept telling me snow conditions at Heavenly were still wintery in north facing aspects, I found that hard to believe when I was sweating at lake level just walking from my car (though maybe the down jacket, gloves, hat & scarf were overkill).

Since conditions are at that in between stage at anything not north facing (not quite corn and most definitely not winter snow), we had agreed that ski touring was the call for Saturday, if only to get a bit of exercise.  N had been trying to ski tour with a friend of his, and he and his girlfriend were free.  We don’t usually ski tour with others, primarily because of most of our friends either don’t live near us or are parents of small children.  So it was sort of a novelty to meet and ski with another couple.

We ended up going up towards Emerald Bay to ski Jake’s Peak, a mountain at the north end of the bay.  We’d skied it once before, but had never done it from the south side.  It ended up being a rather athletic climb, as it was steep in places, and firm enough to require either ski crampons (which I had) or experience skinning (which I did not have). Due to the boniness of the originally planned descent, we ended up skiing across the ridge of Jake’s to another slope that had more snow, garnering some cool views along the way.

The payoff for the uphill work was on the descent, which was on a slope that appeared to lead directly into Lake Tahoe. That snow conditions were optimal (an inch or two of soft snow on a consolidated base) only made the descent better.

Given my overall ski fitness thus far this season I think I did pretty well.  That I was able to go home afterwards and make an awesome chocolate raspberry cake (thanks to Clotilde’s book) and a tasty chicken lima bean mushroom stew for friends was the surprising thing.  We’ll see how early I wake up tomorrow though…

Spring at Lake Tahoe means longer days, loads of sun and the freeze-thaw cycle that creates perfect corn snow.  It’s a big reason why the BF and I go backcountry, that plus we can avoid the craziness of the resorts *and* the dog gets a workout.  This season’s corn snow has been ripe for harvest for some time, but due to travel schedules and whatnot, we’ve not done much touring.  Today’s jaunt could be considered a front country tour, as we literally park the car on Highway 88 (south of Lake Tahoe) and start skinning up the snow.   Despite the easy access we didn’t see another soul the whole day. 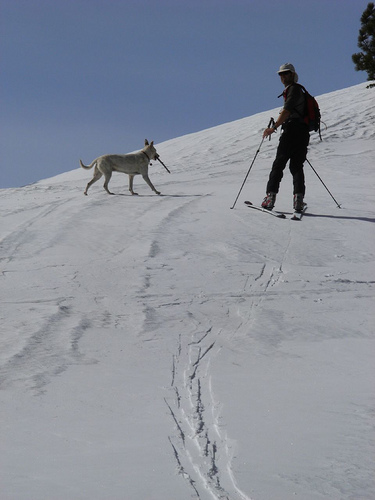 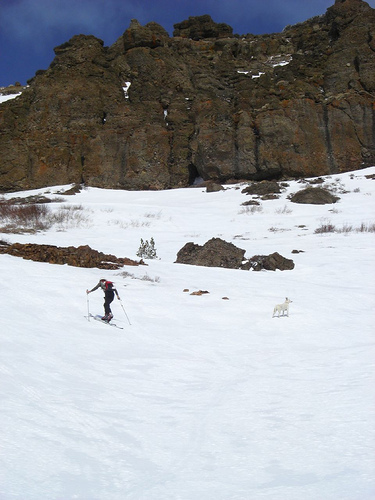 Soleil was so stupidly happy to be out that she was out of breath and panting from all her sprinting, stick gathering and snow rolling within the first 15 minutes.  N and I, on the other hand, conserved our energy for the 2500 foot climb to what we thought would be Stevens Peak, but thanks to my memory of a left turn, ended up being the ridge between Stevens Peak and Red Lake Peak.  That said we found great skiing.  Soft snow that was nice for turns but not so deep as to cripple our aging-but-enthusiastic mutt.

All in all a relaxed tour.  The combination of sun and exercise has wiped the three of out however.  Think tomorrow will be more along the lines of the chairlift riding variety.  The dog’s probably not going to need any exercise tomorrow, seeing how she’s currently passed out by the fire.

The sun has finally come out at the lake, after a pretty wet April. And while I’m loving the vitamin D, the temperatures have shot up from the winter realm straight to summer, with no intermediate spring. The result is that snow has melted rapidly at lake level, but hasn’t done much for the snow at higher elevations.

I went to Kirkwood last Sunday for its closing day, and the snow was soft, verging on mushy, at 9 am. It’s almost heretical for me to admit, but I left after a little over an hour….and took the dog for a hike in Gardnerville. For those who know me and my self-admitted obsession with sliding on snow, this is unfathomable. Yet the conditions weren’t holding me. I’m a corn snow lover in the spring, which requires a hard freeze at night, something we haven’t seen much of the past week.

However, I am going to give it a shot this weekend. Alpine Meadows and Squaw Valley are still open right now….as is Mammoth. So there’s still mucho resort skiing to be had, without counting the backcountry.

There was an error retrieving images from Instagram. An attempt will be remade in a few minutes.